How to Backup Exchange for Free

So, more and more companies deploying an Exchange. And as you know, the next step after Exchange Implementation MUST be a backup configuration.

And now is a very surprising point. Many sysadmins are willing to pay over for complex backup solutions which they don’t necessarily need.

As “Exchange Dinosaur” (I still remember Exchange 4.0 :))) I would like to say that one of the best backup (and what is more important, restore solution) always was Microsoft NT Backup. Since Windows 2008 Microsoft has removed NT Backup and replaced it with “Windows Server Backup Feature”

First, I need to mention the aspect that Microsoft has enabled Windows Server Backup to take VSS backups of the Exchange databases, so the following can work on Exchange 2010 and Hyper-V, on Windows 2008, Windows 2008 R2 or Windows 2012/R2.

Ok, I should stop talking and just show you how to implement a FREE Backup of Exchange  …

By default, the Windows Server Backup Feature is not installed with yourWindows Server, so we need to install it. We can do this by navigating to the feature section of Server Manager or from a Command Line Interface, usingPowerShell:

The result should be similar to the bellow:

Now we should be able to find “Windows Server Backup” in ourAdministrative Tools. Let’s run it.

Note: Keep in mind that we have to install Windows Servera backup on the mailbox server.

Well, after starting Windows Server Backup, we should see the following interface”

Now we have to configure a Backup job. From the task panel select “Backup Schedule” or “Backup Once” depending on your needs. Today I will talk about the “Backup Once” procedure, but both are almost similar.

So after selecting “Backup Once” we will see the following screen and the only option available for us will be “Different Options”; do so and then click next. 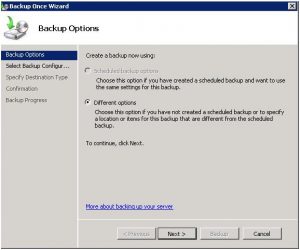 In the “Select Backup Configuration” section, we will choose “Custom”. 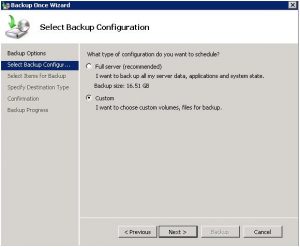 The “Select Items for Backup” section is extremely the most important part of our configuration. First of all click on “Add Items” and select the folder, where is stored Mailbox Databases and their associated Logfiles. In Exchange 2010, by default, this folder is located at” 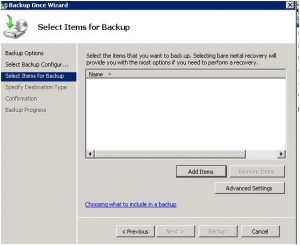 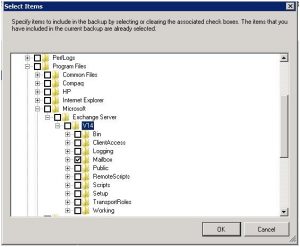 Now when we have selected the mailbox folders, but before we are going to the next screen, we need to click on “Advanced settings” and then “VSS Settings”. We have to be sure to select “VSS Full Backup” as shown in figure following screen:

In the next screen, select to use a remote shared folder if you want to store backups outside of Exchange server……And selected the shared folder you are planning to backup to. 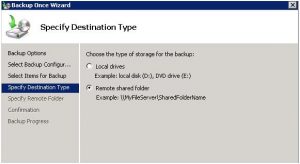 Finally, we should confirm our backup options, and … read other articles on http://www.highclouder.ninja/ site, while you are waiting for the process to finish :). 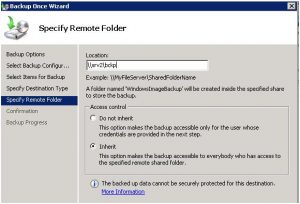 As a conclusion I’d like to say that Windows Server Backup is greatly improved in Windows 2008 R2.

Specifically, two very important new features in R2: The ability to backup a specific folder rather than a volume and when running Database Availability Groups, the flexibility to backup from both an Active or Passive Database.

In one of my next articles, we will look at the restore procedure and scenarios!